We were delighted to host at our monthly Topical Talk on 28 June, our guest speaker Richard Storer, Community Relations Manager, Crossrail. We were literally taken on a whirlwind journey of the construction of Crossrail. Richard’s talk described the chronicling of Europe’s largest infrastructure: 43km of new train tunnels and 8 new underground stations, now at 92% completion.

Richard also explained that the cost of Crossrail was £14.8 billion and the major benefit to the economy was £42 billion. Twenty four trains will be operating each hour in each direction at peak periods through the centre section, with 200 million passenger journeys per annum. He also described one of the tunnel boring machines (TBM) being named Sophia on St. Barbara’s day 2012, which is a continental tradition of giving the TBMs female names.

Following the timeline, Richard gave us details of where the funding had come from for this extraordinary project. He stressed the importance of being sensitive to the surroundings where the construction work took place. An example was Wallasea Island where the excavated material (6 million tonnes) was shipped to an area of low grade agricultural land. The RSPB bought this land and Richard related that this development is now home to thousands of migrating birds. There was also special care taken around the area of Smithfield (meat market), during the building of the new Farringdon Station, as care was taken not to allow dust to fall on the meat. An art work of tumbling diamond shapes was installed within the design of the station to reflect the close proximity of Hatton Garden (the jewellery area close by).

There is still further development with Liverpool Station, Finsbury Circus, and Moorgate. A mass plague burial site was excavated at Bedlam, Liverpool Street. Richard told us that an archaeology team documented and removed the remains, where they were taken to Canvey Island to be buried.

Equally at Whitchapel where unusually the underground station is sited above the Overground; the construction team built a new car park for Sainsbury’s and temporarily rehoused 60 family units. The new station will be fully accessible with no steps at the entrance, but with ramps and a small lift.

Continuing with commitment to aesthetics a roof garden was established at the new Canary Wharf station in May 2015. 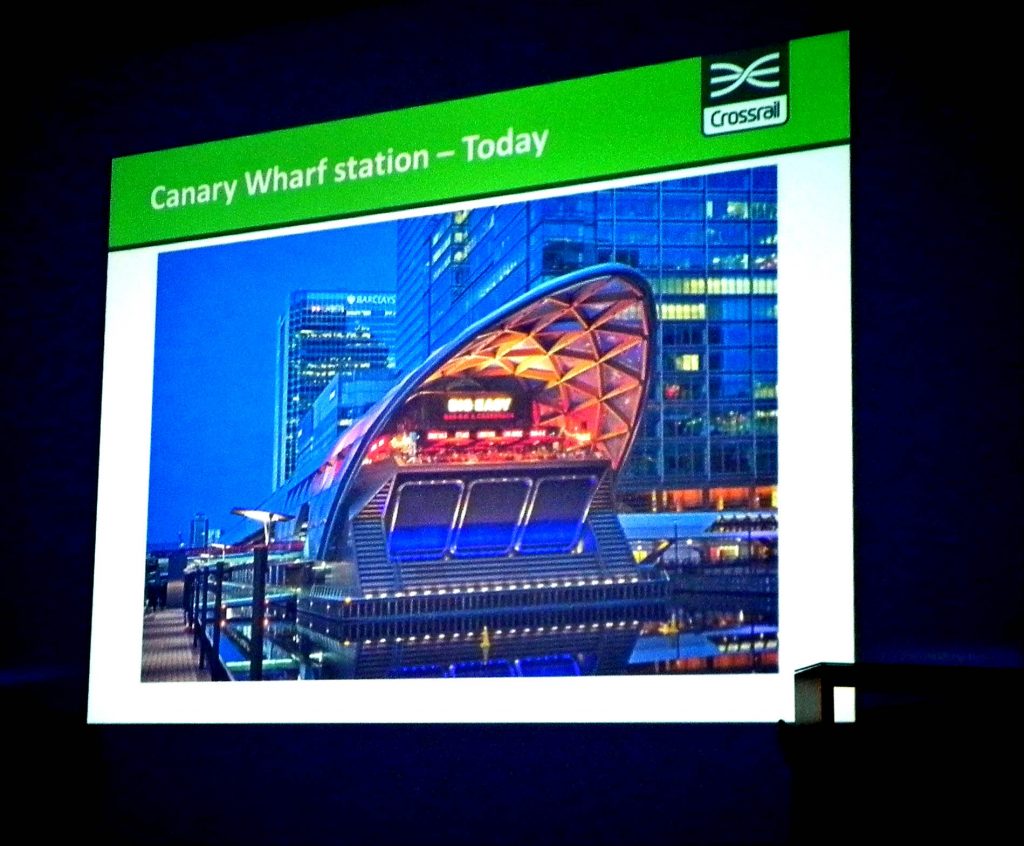 Alongside the construction work Richard paid tribute to the 15,000 skilled workers, including 1000 apprentices, (the original target had been 400) and that the project benefitted the whole of the UK and was not just ‘London centric’. Over-site developments will take place above most of the stations, providing new commercial, and residential properties. An exhibition of the project can be seen at the London Transport Museum.

It was a delight for our audience to hear Richard explain the journey of this monumental project and there was a great sense of pride of British engineering, coupled with the sympathy to the surroundings.  Some of our members were so enthused they have now asked to take the journey down to Reading, as we can all use our Freedom Passes!